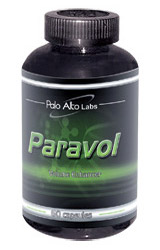 Paravol claims to provide stronger and longer, more intense orgasms for men who take Paravol regularly and on a long term basis. It will increase arousal and stimulation with the horny goat weed, and help boost sexual energy and staying power with Catuaba bark. Both of these ingredients will also help to increase ejaculation volume on some level, which does aid in producing longer, stronger and more frequent orgasms. Paravol is another one of several questionable male sexual enhancement products that make no clearly worded, carefully spelled out promises and in fact seems to avoid them all together. Enhanced sexual performance is the goal of Paravol, but the manufacturers fail to mention the specifics that are necessary for potential buyers to weigh the product against others in the same field.

Paravol ships discreetly from the manufacturer and is available for order over the internet, preventing the need to buy such a personal product in public. A free trial of Paravol is offered, for the cost of shipping only. A free full sized bottle of Paravol will be sent to those interested in taking advantage of this offer, and hidden among the terms of the site is information indicating that those choosing the free trial will be automatically enrolled in billing and shipping cycles unless they call to cancel. For purchased bottles of Paravol, there is a 30 day return policy from the date of order, leaving not much time to test a product that claims to need 4 to 6 weeks to reach full effect.

Paravol does indeed contain ingredients that have been shown to be successful in increasing ejaculation volume. The combinations and concentrations of active ingredients are not the best, but after a significant amount of time of regular use, Paravol will demonstrate some noticeable increase in ejaculation volume. The problem with Paravol, however, is the length of time it takes to be effective combined with the short return window. It is impossible to evaluate Paravol fairly without being roped into expensive monthly shipments, and for the many men who will experience no benefit from Paravol, this is a costly investment.